Thread from the Mueller Report 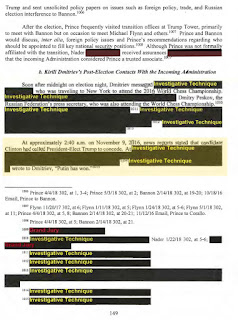 From page 149 of the Mueller report:

In his first comments since Mueller finished his probe, Putin sought to cast the 22-month investigation as a failure and disregarded the special counsel’s exposure of a Russian operation to put Donald Trump in the White House.

“It was clear for us from the start that it would end like this,” the Russian leader said as the Trump administration and Congress sparred over making Mueller’s still-confidential investigation report public.

Attorney General William Barr wrote in a summary of Mueller’s report that the special counsel found no evidence the Trump campaign “conspired or coordinated” with the Russian government to influence the election.

So On 11/9/16, someone from the Trump campaign, likely Eric Prince, called the Russian oligarch Kirill Dmitriev to report "Putin has won."

Three years later, the outlaw AG Billy Barr would lie about the report he is covering up to say it found no connections between Doanld Trump and the Russian government.

Today, the Republican party is leading its followers in a war against truth, justice, and liberty.

Just so you're aware of the context of our times.