November 22, 2022
Laid out in a timeline, so everyone can make sense of what's happening before the fascists unload the next Biden-Burisma conspiracy theory.

February 2014: Joe Biden had been made the point man on Ukraine.

April 2014: In April 2014 Zlochevsky named Hunter Biden, son of then U. S. Vice President Joe Biden, to Burisma’s board as a director of Burisma.

April 2014: The Serious Fraud Office of the United Kingdom froze approximately $23 million belonging to companies controlled by Zlochevsky. At the end of 2014, Zlochevsky fled Ukraine amid allegations of unlawful self enrichment and legalization of funds.

November 2014: Deutsche Bank reported that $24 million of funds from his companies were wired from Cyprus to the Latvia branch of PrivatBank, the bank co-owned by the oligarch in the Dnipropetrovsk region, Ihor Kolomoyskyi.

2015 Through 2015 and early 2016, domestic and international pressure (including from the IMF, the EU, and the EBRD) built for Shokin to be removed from office. The Obama administration withheld $1 billion in loan guarantees to pressure the Ukrainian government to remove Shokin from office.

April 2018: an alleged recording of part of a conversation between President of Ukraine Petro Poroshenko and fugitive Ukrainian lawmaker Oleksandr Onyshchenko was released by Onyshchenko which implicated Mykola Zlochevsky in graft.

June 2018: after the Solomyansky District Court in Kyiv had annulled the ruling of the Specialized Anti-Corruption Prosecutor's Office (SAP) to close a criminal proceeding against him in 2017, Zlochevsky was accused of having illegally issued, while he was Ecology Minister in 2010–2012, oil and gas licenses to the companies that belonged to him.

2019: Authorities said the criminal investigation on suspicion of embezzlement is currently on hold because Zlochevsky's whereabouts cannot presently be determined. Zlochevsky is reported to live in Monaco. He bought Cypriot citizenship somewhere between 2017 and 2019.

July 2019: Three days after Giuliani’s call, Zelensky was granted what turned out to be his infamous July 25 phone call with Trump. During that call, the president increased the pressure for Ukraine to “do us a favor” and do “whatever you can do” to “look into” “Biden’s son” and Biden “bragging that he stopped the prosecution” of Burisma, the company associated with Hunter Biden. Trump brought this up in direct response to requests from Zelensky for a meeting and “to buy more Javelins from the United States for defense purposes.”
SOURCES:
Zelensky’s “Perfect Phone Call” With Trump in 2019 Explains a Lot Right Now
Story by Jeremy Stahl • Mar 2
Wikipedia on Mykola Zlochevsky

Giuliani asked for visa for ousted Ukraine prosecutor Viktor Shokin who helped Giuliani form the basis of an unproven story that then-Vice President Joe Biden pushed for his firing to help his son, Hunter Biden. 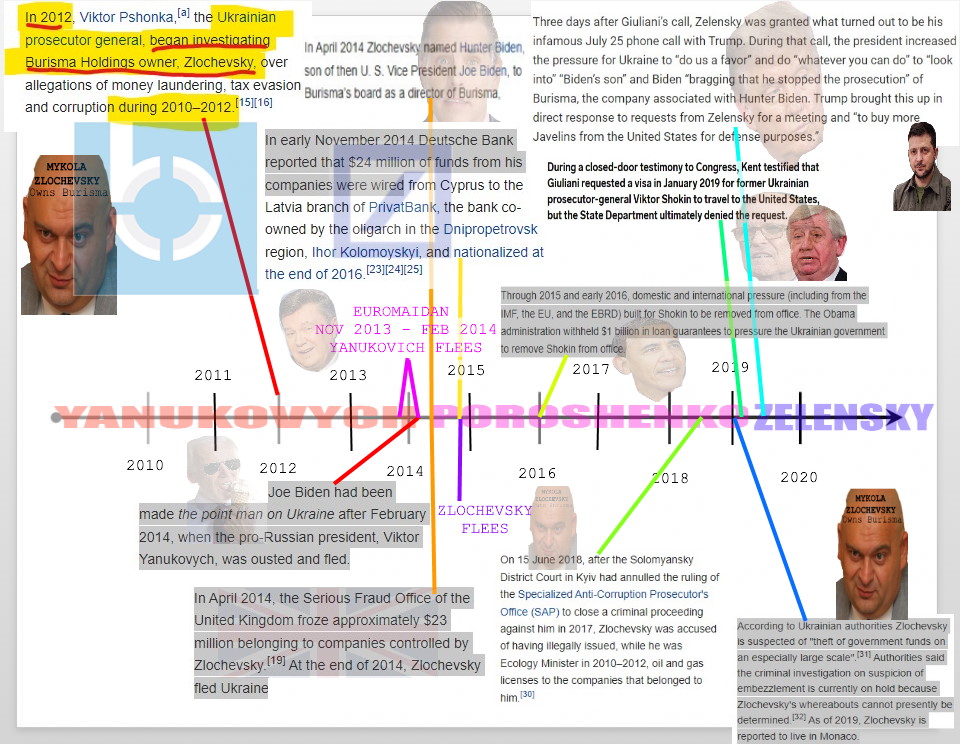