News broke today that Malheur County Sherriff Brian E. Wolfe is refusing to enforce the health mandates ordered by Oregon Governor Kate Brown. He says that it's not government's place to dictate health mandates to the people. He says this twice in his own letter.

But that means he refuses to recognize the authority of the Court that decided in 1905 that it is precisely government's place to enforce defensive measures to stop the spread of a disease. This is old news. From Constitution Daily:

Brian is essentially going rouge. His authority is derived from the government and the rule of law. If he no longer recognizes rule of law, he can no longer function as an agent of law enforcement and must be removed.

In his own statement, his only evidence for his stance is what he "believes". He is willing to defy the Governor of the State of Oregon, the highest Officer of the Executive Branch of the state, based on his "belief" which he leaves unsupported. 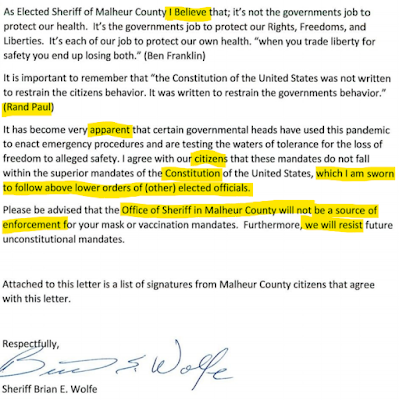 Furthermore, he cites Rand Paul, a known insurrectionist and seditionist intent on overthrowing the United States of America. The same Rand Paul who hand-delivered a letter to Putin for Trump.  The same Rand Paul who voted to acquit Donald Trump twice despite overwhelming evidence against him. The sheriff is rebelling against the source of his own authority.

The truth is not a popularity contest, so the fact that he "agrees" with "citizens" means nothing if what they agree upon is wrong, which it obviously is wrong, because the US Supreme Court already ruled on it. Some of us lived through smallpox and polio vaccinations. Brian is saying he agrees with people who are wrong, and he will give up his authority to do so.

Governor Brown should take Brian at his word and fire him.

July 25, 2019
PoGokeRo Pirate Broadcast 7/23/19 - Homework Visions materialize with spirit and resources.  Watch the resource-gathering part as PoGokeRo does the homework and reads the key findings of the Mueller report.  Dig in as stack upon stack of obsidian is slowly mined from lava pits. Listen to the stream of crimes uncovered in the Mueller report and recoil in horror at that which we have yet to learn.  ACS website where I got the Mueller Report breakdown Twitter: @pogokero web: www.pogokero.com PLEASE SUBSCRIBE! donate: paypal.me/pogokero
Post a Comment
Read more