July 14, 2021
UPDATE 7:52 PM: I googled my name and sure enough, the newspapers are reporting I had been arrested. I freak the fuck out. After frantically driving down to the Salem Police Station downtown to straighten everything out, I got a call two hours later.  Officer Treven Upkes contacted me to apologize for the error in the press release. He has contacted all the newspapers for a retraction and offered to speak to my boss if there should be a need. I was never arrested or charged with anything. The newspapers have offered a meager retraction.

* * *
The whole thing was designed as a trap. July 13th, 5:50 PM.  I arrive at the Planned Parenthood in Salem, Oregon on Wolverine Street. Already there was the Cult of the White Idol. They used cones to claim a portion of the street in front of their "stage" they set up on the sidewalk.  Men of various sizes, all wearing black and yellow, the gang colors of the Proud Boys, stood around the Cult in a large perimeter, intimidating the neighborhood and claiming the sidewalk and the lawn of the Planned Parenthood across the street. 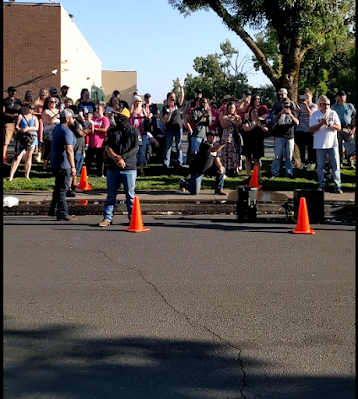 The police intervened and asked me if I wanted Barry arrested. I said "Yes," and a cop took down my information. After this, another cop came up to me and said that I'm not supposed to be on Planned Parenthood property. The sidewalk was swarming with Proud Boys, but that was the only place I could go, so I moved to the sidewalk of Planned Parenthood across the street from the Cult group.

Once there, Proud Boys swarmed all around me to intimidate me. They jostled me, crowded really close around me. They were probably checking me for weapons, that's how close they were to me. The police again intervened and said they had to give me some space, so the Proud Boys moved into the street in front of me to block me. I used my bullhorn to talk to the Cult across the street, and I guess it was uncomfortable for the Proud Boys because they stopped standing in the street in front of me and instead made a line in the street on the other side.

Then as I was speaking through my bullhorn, a man crossed the street and held up a big piece of wood in front of my bullhorn. He stood in the street and moved whenever I moved. I turned around, and two police officers were watching from behind. I pointed to the man standing in the street, pointed to his feet. Then I went back and tried my bullhorn again, but the wood being held very very close was effective. I again turn around to look at the red-headed police officer, and I ask him if I can go in the street. I perceive him nodding to me, giving me the go-ahead. I then proceed to step past the man in the street holding the wood in my face and move closer to the Cult group.

Proud Boys -- including Barry Lloyd James Johnson who was allowed by police to remain on-site even after attacking me -- standing in the street collapsed their line on me, and one Proud Boy attempts to steal my bullhorn by ripping it out of my hands. The police intervene, and roughly seize ME and take me back across the street.
The red-headed officer is now Tough Cop, telling me it's a crime to go in the street. I tell him I looked right at him and asked if it was OK for me to go in the street, and the Tough Cop says "I never said it was OK." Then again, he tries to say it was a crime to go into the street. It's utter bullshit, because as he's scolding me, the Proud Boys are stalking all up and down the street themselves.

I force the cop to make clear the street is off limits, to make bright and clear the lines. The cop makes clear, street off limits (for me).  I go back to my task of saving those who can be saved.
THE NEXT DAY
Just as my work day is about to end, I get a message from my boss. She says a manager saw on the news that Robert Gonzalez had been arrested, and she wanted to know if I was the one who had gotten arrested. It would complicate things for my job. I had to assure her and reassure her that I have never been arrested.

That's when I understood the trap.

The Proud Boys were collaborating with the cops to give them an excuse to arrest me so fascists could go after my employment.